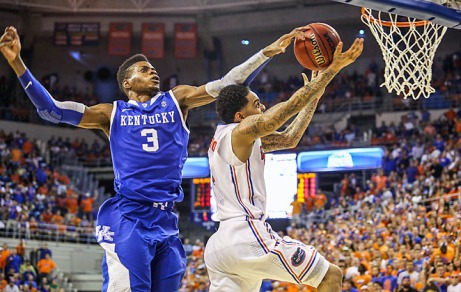 To get it out of the way, no Cleveland fan is happy to see LeBron James win an NBA title for the second straight year. It hurts because everyone wanted to see him do it in a Cavalier jersey. Anyone with eyes and the ability to set aside denial and/or bias knew he’d figure it out, be the best player in the world and win titles. It’s as simple as that, and spending any more time on it is simply a waste.

Cleveland fans need to focus on rooting for Cleveland teams, because recent history has proven that it’s unhealthy to look to LeBron with hopes of deriving any sort of joy, particularly if that joy comes from his failure. It’s like lamenting the fact that the New York Yankees are somehow winning this season. Just don’t do it, and life will be much happier.

What’s more important right now is the budding superstar that is Kyrie Irving and the promising supporting cast that the Cavaliers have already put around him. More immediately, the 2013 NBA Draft is this Thursday.  At this stage of the game, nobody really knows what Chris Grant and company will do (they may not even be entirely sure yet themselves), but it certainly seems that adding a big man will be their first order of business. Operating under that assumption, Kentucky’s Nerlens Noel and Maryland’s Alex Len are their two best options. Here are a few thoughts on what should happen immediately following David Stern’s annual shower of boos.

1. Nerlens Noel – With Alex Len rumors now popping up everywhere, Noel still seems like the best pick because of both upside and circumstance. The Cavs have time to wait, and time without Noel on the court is more time for Tyler Zeller to get minutes and continue to grow under new (old?) head coach Mike Brown. The raw tools that Noel brings are more tantalizing than those of Len, and his high-energy, highly-athletic game is what is necessary in today’s NBA. In the mean time, Anderson Varejao is still a Cavalier and will do just fine alongside an ever-improving Tristan Thompson down low, as long as he’s healthy. Noel’s idolization of Kevin Garnett isn’t a bad thing, either. Niether is his hair.

2. Alex Len – Len is apparently the guy most experts see as the Cavaliers’ pick as of the last couple of weeks. Len brings similar physical qualities to Noel, minus the freakish athleticism. He’s undoubtedly the more skilled of the two big men, and obviously would contribute right away. He too can block shots and rebound, and ESPN’s Chad Ford lists both of those areas as strengths. In no way is he as electric as Noel, but there’s also no question that he would be a positive addition to the roster. He’d at the very least provide NBA-ready scoring in the depth department and be a good change of pace from Varejao. On the flip side, he could start and make Varejao some of the best big man depth in the NBA.

3. Otto Porter – Should the Cavs decide that talking heads know nothing and that they want a wing player instead, Porter is the guy. He’d fit perfectly into a starting role at small forward and give Mike Brown options at the position. The addition of Porter would likely move Alonzo Gee to the bench, which would immediately add depth to a roster that doesn’t necessarily have a ton of it. With plenty of high-level college experience at Georgetown and all of the right tools for a successful NBA wing player (excellent defender, solid jumper from all over the floor, etc.), Porter would help the Cavs immediately. One more note that’s loosely related here, Anthony Bennett shouldn’t even be in this discussion. Cleveland doesn’t need a power forward trying to become a small forward. It hasn’t exactly worked in other cases.

It appears that the Cavs’ decision will come down to which strengths are of most value to the style they’re going to implement under Brown. If they want energy and explosive athleticism, they’ll go with Noel and work with him to develop offensive tools that take advantage of those raw tools. Noel easily has the most exciting upside. If they want a more polished scorer that can stretch defenses, they’ll go with Len and look to improve his bulk and tenacity. Len is probably a safer pick given that his overall game is more developed. Porter is likely the most NBA-ready guy and would be a productive addition, though it doesn’t look like the Cavs will go there.

There may not be any Andrew Wiggins in this year’s draft to be positively giddy about, but Cavs fans should have confidence that they will find a quality starting piece for years to come on Thursday night. We’ll wrap up Draft talk here on the blog early next week regarding the latest rumors and what the Cavs will do with the 19th overall pick.