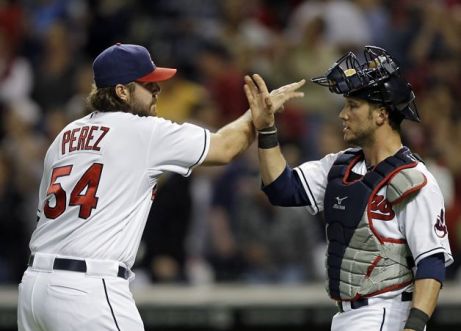 The Cleveland Indians won a game last night by the score of 1-0 over the Oakland Athletics. A masterful effort from Zach McAllister was obviously the highlight of the evening, and Yan Gomes was the difference in more ways than one. He had the only RBI of the game, but also gunned Yoenis Cespedes at second for a crucial second out in the ninth.

What followed was fist pumps from Chris Perez and Gomes that inspired everyone to do a fist pump themselves. Stop lying to yourself, you did it.

A Cleveland team hanging on to a one-run lead all the way to the end? The only logical conclusion is that this team is ready for a pennant. There, someone had to say it.

There’s a different player making a difference seemingly every night for the Tribe, which is a good sign for a team that can’t afford to try to ride a season-long hot streak from any one small group of players. There aren’t any “superstars” on the roster, but there are plenty of guys that are playing like it.

Yours truly has enjoyed eating Ryan Raburn crow after writing him off in a couple of pieces this winter, including this one. I wont even bother trying to defend my position at the time, because Raburn has been that awesome and I’ve gladly taken the instructions to shut the hell up and watch.

Mark Reynolds was one that gave reason for some on-base and strikeout concerns in the offseason, and the combination of him and Drew Stubbs in the lineup was a terrifying thought for some time. That was of course before Reynolds started pulverizing the ball and hitting near .300. It was also before Drew Stubbs dramatically improved the outfield and started getting on base at an above-.300 pace. The duo are still numbers one and two on the team in strikeouts, but whatever.

Besides, who would really want to be on the other end of a Reynolds near-scoreboard shot followed by a stare down and disgusted spit? Terrifying.

In this blog’s last post about the Wahoos, Ubaldo Jimenez was classified as a “volatile and terrifying box of chocolates”. Make him the third one who has served some amount of crow after some impressive outings as of late. The jury is still out on just how consistent this will be, but even a slightly more consistent Jimenez could be a major difference between a above-average/good team and a playoff team.

The Tribe is back at Progressive Field tonight at 7:05. Big Masty is on the bump, and if more than 10,000 could show up that would be excellent. The lack of people in the stands has really been embarrassing, and before anyone tries to reason that they’ll spend money when the Dolans do, they have. They paid players, lowered concessions, and have promoted cheap and safe public transportation options to get to the ballpark. If high ticket prices aren’t your thing, there are some available for as low as 10 bucks on StubHub.

In unrelated news, former Lions wideout Titus Young was arrested twice yesterday, which makes the Cincinnati Bengals the only NFL team left that’s eligible to sign him. Think about the t-shirt possibilities that would come with that marriage.

Also, the latest ESPN.com Insider NBA Mock Draft has the Cavs taking Georgetown F Otto Porter, which would be nice. We’ll see how the lottery plays out later this month.

Finally, who wishes they had the jaw endurance to mow through as many pieces of Dubble Bubble as Terry Francona does every single game? No matter how much the Tribe’s performance may fluxuate, Tito can always be counted on to be comfortably chewing at least 4-5 pieces of gum simultaneously at any given point. Freakin’ machine.