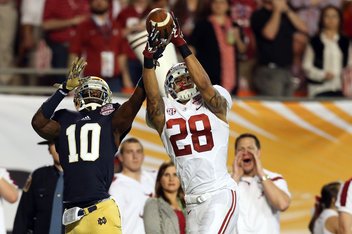 First of all, if you’re at work, continue past the next sentence. If you’re not at work and you aren’t already wearing a Browns shirt today, shame on you. Now, if you’re at work and your place of employment allowed you to wear Browns apparel today, then please let me know where that is. I’d like to drop everything I have planned for my future and work there forever.

Before we get started, how Cleveland have the last couple of weeks been? Just picture a heroic voice saying the following right before Roger Goodell walks to the podium tonight with the Browns’ pick:

“Against all odds, the Cleveland Browns have arrived in the city that never sleeps. Despite FBI raids and solicitation charges, they have ripped through the chains of the law in a way only Cleveland can. Here’s Roger Goodell.”

The newest Browns regime (they can’t be called just “new”, because that would imply that the last one was there for awhile) drafts for the first time today, picking sixth overall. As it stands, they don’t have a second round pick when the draft continues tomorrow, so that may be something to be aware of should they not see someone they love at six.

Presumably, someone may want to jump up to grab an offensive lineman, which would allow the Browns to try to find some value later. The roster as it stands, particularly with new schemes coming in with the new coaching staff, is not what anyone would call being “one player away” from anything substantial. Assuming Lombardi and company feel the same way, it would make a ton of sense to get a second rounder from somebody if they can.

If they don’t trade down, Mel Kiper says that it’ll be Alabama CB Dee Milliner. He seems to be the nearly-unianimous prediction according to most draft “evaluators”. A lot like Joe Haden at seventh overall in 2010, Milliner seems like the common sense pick for the Browns at six if he’s there. He’s got the speed, the frame, and the college pedigree to be a productive starter opposite Haden immediately.

ESPN insider Todd McShay’s last mock had the Browns taking Notre Dame TE Tyler Eifert, and his current one has them selecting West Virginia QB Geno Smith. All this really means is that he’s clearly been selected by ESPN as this year’s guy to make no sense and scare the living bejeezus out of everyone in Cleveland. Luckily, we’re already one step ahead of McShay, and know full well that that can’t and won’t possibly happen. Right?

Since this is the first draft that this blog has “covered”, this will be the first official NFL Draft projection ever made by Believing Since 1999. Without further ado…

“With the sixth overall pick in the 2013 NFL draft, the Cleveland Browns select Dee Milliner, defensive back, Alabama.”

Because the first round is all that will happen tonight, we’ll wrap it up there. Check in all night on Twitter as the draft unfolds, and may the Lord be with Mike Lombardi and his staff.