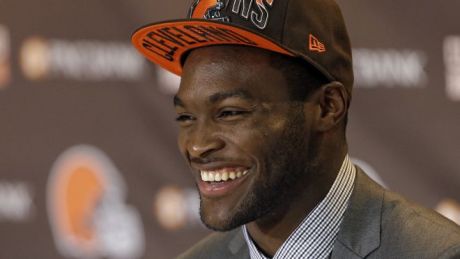 The Cleveland Browns took another step towards being able to compete in the in AFC North, drafting five players they hope can contribute as early as this season. While new general manager Mike Lombardi was not thrilled with the talent level in this draft overall, he hopes that at least a few of the draftees will help Cleveland become contenders.

Cleveland started things off when they selected Barkevious Mingo out of LSU. It is clear that Ray Horton’s 3-4 defense will utilize Mingo as an edge pass rusher in a lot of packages. Some thought that Mingo was a slight reach at #6 overall, but few doubt his overall talent.

After taking Josh Gordon in the supplemental draft (using their 2013 second rounder), the Browns decided not to trade up and instead waited until the third round to take cornerback Leon McFadden out of San Diego State. He is best suited for the slot, especially since he has some of the best foot speed in the draft at his position. If needed, he could also see time on returns.

Those two were the only two players drafted before the sixth round, as Cleveland opted to trade for future assets. This is a sound strategy if the management truly felt that no one on the table was worth picking up. One surprise is that the Browns did not end up taking a quarterback in the 6th or 7th round. Instead, they opted for Jamoris Slaughter (safety) in the 6th, and Armonty Bryant (defensive end) and Garrett Gilkey (offensive tackle) in the 7th.

Slaughter is probably the best of the bunch, as he was a star on defense for Notre Dame last season until he tore his Achilles. He is a cerebral player capable of playing in the secondary all over the field, and if he’s healthy he could be a player who ends up getting a solid amount of playing time in 2013.

Cleveland’s 2013 draft will center around the success of Mingo. They took a bit of a risk on him, but he has the talent to be the best player in the draft and fantasy football leagues will have plenty of owners hoping for him to fit in quickly. How the Browns deal with him will ultimately dictate their fate.