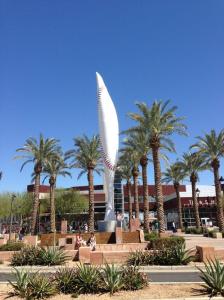 A final farewell to Goodyear Ballpark. That statue is so cool.

As promised, Believing Since 1999’s final account from Goodyear will focus on dissecting the Tribe’s walk-up music in so much detail that you may not even find it entertaining by the end. We’ll start with a review of all of the notable ones and then a ranking of the top three and why. Buckle up, because as I write this it is late in Phoenix, and I’m about to board a red eye back to Cleveland to complete the total screwing of my body clock. Here we go.

– The Cabrera/Carrera Latin Jam Fest – The walk-up songs of Ezequiel Carrera and Asdrubal Cabrera were unidentifiable due to the fact that they were entirely in Spanish and spoke entirely too fast for the limited Spanish vocabulary of the author. Still, don’t count them out because they both had the classic Latin beat which has always been a personal favorite as far as getting in the mood to hit a baseball. A dark horse candidate, so to speak.

– Cedric Hunter’s “Turn All the Lights On” by T-Pain – This one is really the reason that this contest is even happening, which may give it an unfair advantage. At any rate, Hunter hit the nail on the head with this selection, and quite frankly reminded me that the song even existed. The little tiny portion of the song that played right before he stepped in just struck me like an epiphany. In other words, this song is a jam. Don’t even pretend to say you skip T-Pain songs when they come on Pandora.

– Lonnie Chisenhall’s “Crazy Train” by Ozzy Osbourne – A classic selection from Lonnie. Who doesn’t like a little Crazy Train at any given time? Let alone stepping into the batter’s box. Hell, I would appreciate it if Crazy Train played every day when I stepped out of the door in the morning. What’s more, Chisenhall promptly deposited a bomb over the left field wall. It’s a classic stadium jam, and it worked. Tough to beat that combo. Lonnie is on fire this spring.

– Jason Giambi’s “Sabotage” by The Beastie Boys – This was covered briefly in a previous report from Goodyear, but Giambi is the only one on the club old enough to remember the Beastie Boys’ entire catalogue during the time their records were actually released. That gets The Giambino major longevity points. Also, Sabotage is just a great song. The Indians didn’t make this process easy.

– Adam Abraham’s “Uprising” by Muse – Abraham, an Akron Aeros alum and someone who happened to give me a bat of his which is currently on display in my apartment, was a surprising addition to the lineup on Thursday. What wasn’t surprising was his interesting choice of music. Muse has always been a borderline group for my taste, but it totally worked here. They. Will. Not. Tell Adam he doesn’t have great taste in walk-up music.

– Jason Kipnis’ “Welcome to the Jungle” by Guns n’ Roses – Kipnis and Chisenhall must be good friends, because they know how to get motivated for an at bat. This one is also a classic, but would have ended the competition easily if it were Sweet Child O’ Mine. As it stands now, look for this one to medal. Jason Kipnis also has a sandwich named after him at the Diamond Deli in Akron, so there’s that.

– Ryan Raburn’s “Country Girl” by Luke Bryan – Nothing wrong with one of the biggest hits from one of country music’s biggest names today. Because I go to school in Kentucky, this evokes some kind of unwanted yet comforting emotion of the old Kentucky home. Y’all. This qualifies as another dark horse of sorts.

– Francisco Lindor’s “Good Feeling” by Flo Rida – The young gun and Indians top prospect got an at bat late in the game Thursday, and his walk-up music didn’t disappoint. Much like T-Pain and David Guetta, Flo Rida is an artist that most guys don’t like to admit produces absolute bangers that make you want to just lose it every time their song comes on. Lindor may be young, but his swagger is through the roof, and this song fit it to a tee. In order to keep his rookie eligibility, he won’t be included in the final rankings, but he had to be included in the discussion.

Without further a do, here are the final rankings. Drum roll…

1. Jason Giambi with “Sabotage” by the Beastie Boys. Because it’s just too perfect. He also ripped a double in the game. If you’ve never seen a jacked-up 42-year-old dig out a double and finish it with a head first dive, your life is incomplete.

2. Jason Kipnis with “Welcome to the Jungle” by Guns n’ Roses. Second, because it wasn’t “Sweet Child O’ Mine”.

3. Cedric Hunter with “Turn All the Lights On” by T-Pain. The reason for the season deserves a medal.

Runner-up: Lonnie Chisenhall with “Crazy Train” by Ozzy Osbourne. Still a song that never deserves to be turned off, but just didn’t hit me with the originality factor or the “of course this is his walk up song” impression. Lonnie also went yard, so who’s the real winner here anyway?

While Jason Giambi may be this contest’s winner, I think that at this point everyone is just really upset that we will no longer get to watch Shin Soo Choo walk up to the plate to some of the most hardcore rap anyone has ever heard. That never got old, and the question of whether or not Choo ever knew what was actually playing or what it all meant will now last for eternity.

It’s been an unbelievable trip to Goodyear, and there’s so much to be excited about with this year’s Tribe. Thanks for following along here on the blog, and rest assured that there will be plenty more talk on Twitter and here on the site about baseball, the Cavs, and the Browns in the near future.