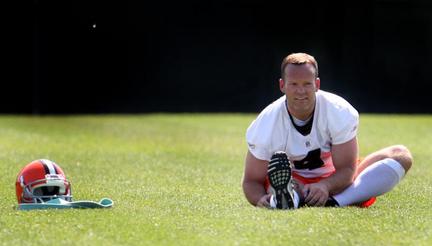 Perhaps the only situation that could possibly be worse for the collective psyche of Cleveland than Josh Cribbs’ departure is the departure of Phil Dawson. Tuesday, Phil Dawson had a few things to say on Twitter. You may want to make sure you’re sitting down and that you don’t have any sharp objects near you before you proceed. It went like this:

Phil Dawson is leaving Cleveland. Coping with this is a ridiculous preposition, so let’s just be honest and say that this one hurts. Dawson was the only remaining member of the original 1999 team remaining, which obviously made him a personal favorite of this site. Moreover, he’s the only Browns kicker that I’ve ever rooted for. We could go on for days and watch countless videos of Phil’s greatness, but here’s one that immediately came to mind.

Here are some songs to cry to:

– What Hurts the Most by Rascal Flatts

Everyone copes differently, and if anyone has some other ones I will happily add to this list as we mourn the loss of Philly Dawg.

If anyone was looking for a reason to be mad at the new regime, this could be your first chance. This blog was very critical of the new front office from the outset, and while now may seem like a time to consider the torches and pitchforks, the offseason so far has made a surprising amount of sense. The only thing that should have kept Dawson from retiring with the Browns is a desire to play for a contender. Hopefully that was the case. If not, burn it down. Burn it all down.

For the sake of everyone’s sanity, we will assume that Phil wanted to play for a contender, and nobody deserves that chance more than him. In that sense, Cleveland should be happy for him. Since the Browns are unlikely to be in the championship picture in 2013, seeing Phil freaking Dawson raise the Lombardi would probably be the next best thing.

None of this makes the situation easier to swallow, and quite honestly a lot of uncertainty comes to mind thinking about how many kickers the Browns will have to go through before they find another guy who has a knack for kicking in adverse conditions on the lake front.

That brings us to my most memorable Phil Dawson moment. He did these kinds of things a lot, but the conditions he faced in the 2007 “Blizzard Bowl” (or whatever) when the Browns beat the Bills 8-0 will forever be engraved in my mind. So will the lack of feeling in all of my extremities, the howling winds, and the realization that none of those things mattered as long as I was at Cleveland Browns Stadium with my Dad.

There is no way that anyone could have emotionally prepared for this, because it seemed unthinkable. It’s still unthinkable. Damnit, the tears are coming back.