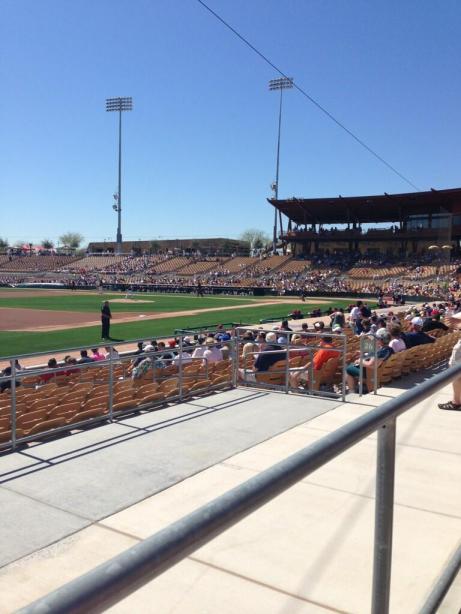 The first Tribe runs since Believing Since 1999’s Monday arrival in Arizona crossed the plate Wednesday afternoon. The game story from the 5-2 win over the White Sox is here, and the box score is here. This post is going to be relatively short because there were no annoying or entertaining spectators. The game was generally pleasant and a joy to watch, other than the familiar “I feel like I’m in an oven” sensation that comes from sitting directly under the sun for hours in a desert. Before we dive into the game, which was a good one for multiple reasons, here are random notes from the Believing Since 1999 travel journal you may have come to know and hopefully love:

– Lunch in Glendale before the short trip to Camelback Ranch (also located in Glendale) was at the Saddle Ranch, located near Jobing.com Arena in the same district as last night’s Margaritaville trip. The BBQ Bacon Burger was exactly what the doctor ordered as pre-game fuel for Wednesday’s AL Central throw down. It may or may not have been the exact same thing I had at Margaritaville Tuesday night.

– The stadium that the White Sox share with the Dodgers is a really cool venue that seemed to be much bigger or at least more spread out than the Indians’ digs in Goodyear.

– Sun burn is not a joke. The struggle is real.

As for the game, a couple of quick highlights that bode well for the future:

Asdrubal Cabrera smacked a beautiful 2-RBI double to right field in the third to continue his strong start to the spring (.375 BA), scoring Lonnie Chisenhall and the speedy Michael Bourn. Speaking of hot starts to the spring, Lonnie Chisenhall (2-3 on Wednesday) is hitting at a .393 pace. For the lineup as a whole, Cabrera being a reliable bat wherever he ends up hitting is essential to the Indians’ sustainability in 2013. The lineup is much improved, but it will rely on Cabrera in the top half of the lineup. If Chisenhall can live up to the expectations placed on him when he was drafted, the Indians could have a dangerous lineup from top to bottom.

Ubaldo Jimenez was impressive in his five innings of work. It looked like a meltdown was in progress in the third when he gave up two, but he quickly recovered and prevented further damage. Nobody can expect Ubaldo to get back to the pitcher that threw a no-hitter in 2010. There’s a reason that the Rockies were fine with unloading him for two prospects.

What has to happen with Jimenez in 2013 is a rebound season in which he can give the Tribe innings and keep them in games. Starting pitching will be the difference between competing and struggling to get out of the basement. So far, there have been signs that the position could be shored up by a fresh Justin Masterson and a resurgent Scott Kazmir, but Jimenez will be a huge key to the rotation’s ultimate success regardless. Bet you’ve never read that paragraph from any other baseball writer this year. Cutting edge insight, only at Believing Since 1999. You’ve found the holy grail, folks.

What all of this amounts to is that the Indians notched a 5-2 victory over the White Sox in a Spring Training game, which can only mean that the Tribe is the indisputable favorite to win the division, the American League pennant, and the World Series. *Mic Drop*

One game remains in Believing Since 1999’s short but sweet tour of Indians Spring Training. Thursday afternoon, we’ll be back in Goodyear for one last hurrah against another division rival, the Kansas City Royals. Letting the AL Central know they mean business, one meaningless Spring Training win at a time. Go Tribe.

P.S. – Pour one out tonight/tomorrow for Josh Cribbs, who is heading to the Arizona Cardinals. He tweeted Wednesday night that he loves Cleveland, and I almost wept openly. We will all miss you, Josh. Thanks for the memories. Forever a Cleveland Brown.