Tonight, a Cleveland team is in action as the Cavs take on the Atlanta Hawks at home. Unfortunately, they announced earlier this morning that Anderson Varejao will undergo surgery on his quad injury and is expected to miss 6-8 weeks. That would explain Byron Scott’s uncertainty when he met with media yesterday.

This news is huge blow for the Cavaliers who still have not had substantial time during which the core of the team has been healthy. Other Cavs that are dealing with injuries are Daniel Gibson and C.J. Miles, and both of their statuses are yet to be determined for tonight’s game.

With that said, here’s the rest of today’s Believing Since 1999 Daily:

– One more thing about Andy’s injury: If the Cavs were thinking about moving him at the right time for a good return, those chances are likely gone as well. This is an all around “screw you” from the basketball gods, because Cavs fans havn’t gotten enough of those.

– Believing Since 1999’s soundtrack today: “Play for Keeps” by B.O.B. Yes, I like Pop/Hip-Hop music. No, I don’t care how “real” he is. His music is catchy, and you’d take the millions of dollars over being a struggling artist too.

– This isn’t news, but Dion Waiters has come off of the bench for the past 4 games, and has been averaging just a hair above his season average as a starter at 15 PPG. He’s also been rebounding better. Maybe Boeheim was on to something at Syracuse after all. Check out the rest of Dion’s season splits here.

– T-Mobile is taking advantage of their new partnership with MLB, making calls to the bullpen all fancy and wireless this year. The T-Mobile girl was was probably the clincher on that deal. Forget a mediator.

– It’s been reported that the Indians have had conversations with free agent righty Shaun Marcum, but with Brett Myers already in the fold, it doesn’t seem likely that those talks will continue. For kicks, here are his numbers from 2012.

– Kyle Lohse somehow remains unsigned after a great year with the Cardinals in 2012. He’s 34, so teams are probably hesitant to pay him what his numbers from last year warrant in baseball money. Again, not a likely option for cheap-o Dolan.

– The Pro Baseball Hall of Fame made their announcement about this year’s class this afternoon, and nobody received the necessary 75%. Craig Biggio came the closest.

– A cool side note for the Tribe, Sandy Alomar and Kenny Lofton were first-timers on this year’s ballot. Whether or not they will ever get in, who knows, but those years were the best.

– Personal nostalgia time: I still remember standing in line at the Medina Buehler’s grocery store as a little kid waiting to get Sandy’s autograph. I was the cut off, and the first person in the line to not get it. This actually made perfect sense to me as a little kid, and I wasn’t disappointed because I rationalized (correctly and astutely for my age, I might add) that Sandy obviously didn’t need his wrist to get tired. Don’t think this story doesn’t come full circle, because when I attended Spring Training years later in high school, Sandy was the Indian’s first base coach. You better believe that I made a major effort to secure Sandy’s autograph. His will always be one of the most satisfying signatures I’ve ever gotten. Sandy has been and always will be a favorite Indian of mine, and I’m glad he is still around as part of Terry Francona’s staff.

– Bengals defensive coordinator Mike Zimmer is interviewing sometime today with Browns brass, according to FOX Sports’ Jay Glazer. At a glance, I wouldn’t mind this option either. Love ’em or hate ’em (I already know which) the Bengals were a successful team defensively this season, ranking 7th in the league in total defense. Zimmer also prefers the 4-3, which would make more sense for our current personnel. Plus, Mike wants YOU. 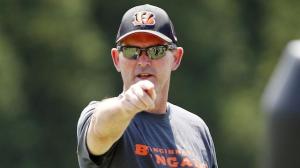 – Panthers offensive coordinator Rob Chudzinski has also been reported as someone the Browns will interview by the PD’s Mary Kay Cabot. Chud has done some interesting things with the offense in Carolina, and while he wouldn’t be my first choice, he’s a lot better than some of the other options that have been floated around. Cabot also mentions that he is indeed a Toledo native and a Browns fan. Don’t forget that he also served as Browns offensive coordinator under Romeo Crennel. Passion can go a long way, so keep your eyes and ears open for this option.

– NBC Sports PFT’s Mike Florio says the Browns aren’t really interested in Jon Gruden. I can understand why, but it was fun to think about what press conferences and NFL Films montages would have been like with him on the sidelines. One more time… 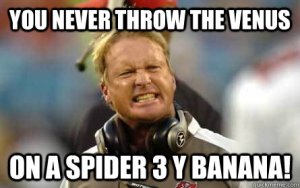 I’m still trying to wrap my head around the fact that the Browns interviewed a CFL coach for a head coaching position and kept a straight face the entire time. I need some Tylenol.

My mini-prediction for the Cavs tonight? Since you asked, Cavs win 95-92. Kyrie Irving scores 25.