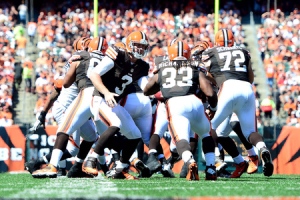 I know I am a little late sitting down to write about yesterday’s strangely encouraging Browns loss at Cincy. This game gave me perhaps the weirdest feeling that I have ever had following a Browns loss. Earlier last week, I wrote that Weeden would have to improve, he did. Trent Richardson would pick up where he left off, he did. Trent wouldn’t be tackled by Maualuga backwards once, it happened ONLY once. Finally, the defense would have to turn in another gutsy performance to have a shot, they damn near did. As you read this, you may occasionally think that the Browns actually won this game. That’s OK, just enjoy it. That’s what believing is all about, Charlie Brown.

It’s just past 10 o’clock here, and Monday Night Football is in full swing. Michael Turner has already turned in a touchdown to help my cause in a tight week 2 fantasy matchup, all is right with the world. Except for the fact that the replacement refs aren’t very good. By not very good, I mean that they may not see football when they watch Peyton Manning drop back. Based on how this game has gone so far, I’m not so sure that Peyton is seeing football either (Oy), but I digress. This brings me to my version of the referee rant that probably every expert, blogger, and casual fan has already tweeted about. I’ll try to keep it short:

Following an incomplete pass during a Bengals possession, there was an incomplete pass. It was as incomplete as they come. The ball innocently fell to the ground. The clock continued to run as if the Bengals had just handed the damn ball off. This all happened conveniently towards the end of the first half, and the Browns could have used the 40 seconds (I may be exaggerating, but not by much) on that last drive. In other words, these guys might as well be NHL refs that have never watched football who are just getting a head start on trying to make up the salary they are about to lose from their latest lockout that 99% of the sports media is completely ignoring (Sorry if that stings a little, hockey fans). Is that short enough?

Anyway, back to Sunday. The best way for me to recap is by sticking with the style that has already garnered critical acclaim and 80 Facebook likes (If you havn’t yet, go like us on Facebook. Theres a sweet little widget at the bottom of the page), a random and wandering stream of consciousness that may occasionally touch on an intelligent thought about Cleveland sports. Here’s this weeks list of Believing Since 1999’s game notes. I’ll go with numbers again, because as Yo Gotti and Lil Wayne so aptly pointed out: Women lie. Men lie. Numbas don’t lie.

1. You’ve been with us since the reincarnation, Philly Dawg. The poster boy for us here at Believing Since 1999. And God, do we love you. Another day, another 50 yarder. No. Big. Deal.

2. The latest and greatest NASA telescope wouldn’t have helped the refs. But we already knew that. Moving on…

3. Brandon Weeden gave us hope. Excellent bounce back performance from him and the offense as a whole. The chemistry he has with Massaquoi is apparent, and Mo Mass is well on his way to proving me completely wrong. I like it.

4. Can’t keep this one in any longer: Trent Richardson, who to this point in his career makes Mean Joe Green look nice, backed me up in my smack talk to Rey Maualuga. Rey could only offer a weak arm on a number of T-Rich’s runs, and to my knowledge only pushed him back one time. To quote the great Daniel Tosh: Nana nana boo boo, stick your head in doo doo, Rey. Professionalism and taking the high road is always the way to go, but since nobody here likes the Bengals, I can say that. You are still a stupid idiot, Maualuga.

5. We knew that the defensive back situation would be a major factor, and boy was it ever. The absence of Haden and Brown (why Sheldon wasn’t out there at all is a huge mystery) hurt us in a big way. Buster Skrine and Dimitri Patterson both put in an admirable effort, and I can’t fault them for much, but it was clear that the Bengals wideouts would have a some chances, and they took them. Hurry back, Joe. As for Sheldon, I don’t know how he didn’t even see the field. Shurmur said he wasn’t injured, and conventional thinking would say that if he isn’t injured, we could use him out there. I’m not going to spend time trying to rationalize that decision, because it seems too stupid to warrant it. Whatever, Pat.

6. Seeing Billy Winn go out with a concussion was a shame. He is off to an impressive start at a position we can’t afford to keep taking losses. Still, let’s hope the training staff is smart with him and makes sure he comes back strong.

7. The art of tackling seems to still be lost on our defense. I don’t feel like much more needs to be said on this if you saw the game at all. If you didn’t, take my word for it, and whatever you do, DO NOT look for highlights of the game. They’ll make you sick.

A bit of a short list this week, but I figured I would spare you the long-windedness. (I never get long winded, everything I say here has a purpose, right?)

Yes, the Browns lost this game. At this point in the season, however, we have to focus on the fact that our offense hung 27 points on the Bengals, none of which were gathered in garbage time. Weeden and Richardson looked like first round picks. Little made a nice play for a touchdown. A lot of good things happened on the offensive side of the ball.

Defensively, at this point we are just trying to piece together a unit. Without Haden, Gocong, Taylor, Brown, and even Winn, it is hard to really evaluate where they are at.

Next week, the Bills come into town. They will surely be another good test, but really any team is a good test for us at this point. Buffalo has a good chance to compete for a wild card spot in my view, but we will save that discussion for later this week.

Until next time, here’s to hoping we see Ed “Johnny Bravo” Hochuli roaming the gridiron sooner rather than later. The officiating injustice has to stop.

Since we like to end on an optimistic note, here ya go: