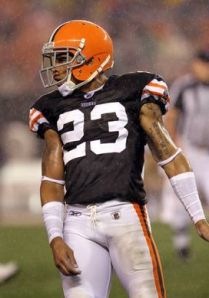 Say it ain’t so, Joe. Keep your swagger up.

Well, let’s kick this one off by mourning the loss of Joe Haden for four weeks. As a good friend of mine pointed out on Twitter earlier this week, Titans WR Kenny Britt only got suspended for one game after being arrested for the NINTH time in 3 years (That’s exactly how he put it). So I guess the NFL’s big message to the children of America other than telling them to play for 60 minutes a day is that no matter what you do, DO NOT take adderall. You’re better off getting arrested once every 4 months or so.

In other news, ESPN reported that after extensive research, Roger Goodell is the most even-handed dictator this world has ever seen.

Alright. Now that we’re off to a rip-roaring start here, I’ll just go ahead and get out of the way the fact that my Einstein’s bagel this morning may have had the shoddiest cream cheese job ever. They also were out of their delicious fresh-squeezed OJ. Gotta strive for excellence everyday, Einstein’s.

On a positive note, the Browns remain within striking distance of the top of the AFC North, sitting just one game back. We’re right in the thick of it baby! Oh, the excitement! I’d say we got these fools right where we want ’em. They’ll never see it coming when we smoke the Bengals on Sunday. OK, they might not be surprised. The Bengals looked like the Bungles of old last weekend.

I’ve been debating whether or not that beat-down is a good thing for our Browns this weekend. The Bengals will probably be pissed off, but if last year was the fluke that I alluded to in my review of week one, there may not be anything they can do but continue to be themselves and suck.

Even better news (hopefully), Brandon Weeden has likely already had the worst game of his career. This should mean that the offense will operate more smoothly, especially with Trent getting another week of full practice under his belt to get more comfortable.

Speaking of Trent: Rey Maualuga said this week that he thought the film of Richardson was “nothing special”. Initially, I thought that Maualuga is just plain stupid. After further consideration, Maualuga is definitely just plain stupid. My bet is that Rey won’t tackle him backwards the entire game. Not saying that he is going to knock his helmet off, but Rey’s brain probably can’t comprehend that though he may be bigger, Trent’s low center of gravity puts physics on his side. So Rey, don’t be surprised when Trent puts his helmet under your pads and pushes you like a 3-year old on ice skates for an extra 5 or so.

As for the rest of the offense, the line will continue to get better together. Joe Thomas and Alex Mack just need to continue to bring the new guys along and they will be fine in no time. Teamwork makes the dream work, boys.

The receiving corps is just going to be a work in progress. Gordon was basically non-existent and Greg Little still struggles with the part where he does the only thing he is paid to do, but both of these guys are still raw, so I’ll save a long rant for week 6 or 7.

Defensively, I would expect a similar effort compared to last week. It is going to take a gutsy performance once again, as now the defensive backfield is also missing a major component in Joe Haden. Now will be the time to test out my theory on Dimitri Patterson, although I have read that Buster Skrine may get the majority of the time on the outside. I can’t say that I understand or agree with that move, because if Skrine spends any time on AJ Green, it will be a long day. Buster can keep up with anyone, sure. But Green will win that battle in the air every single time. This will be an interesting story to follow all afternoon.

The run defense is going to have to improve significantly, because BenJarvus Green Ellis (AKA “The Law Firm”) is an absolute workhorse that will see what LeSean McCoy did to us last week and salivate. This dude doesn’t need to get cute and bounce outside, he will pound the interior all day. Let’s hope Billy Winn, John Hughes, and more appropriately D’Qwell get a good night’s sleep, because they are going to be tested.

This portion of Believing Since 1999 has been brought to you by BenJarvus Green-Ellis and Sons. Accident? Medical Injury? Call 1-800-BenJarvus. We fight for you. (Sounds so right, doesn’t it?)

That concludes the analytical portion of today’s preview. Now for what I really think. Thats right, Believers (If that gets too fruity, shoot me an e-mail. I’m already reconsidering ever calling my readers believers again) it’s time for your Believing Since 1999 pick of the week. Brought to you by, well, nobody yet (feel free to shoot me an e-mail if you want to sponsor my pick of the week, that’d be sick).

The Browns pull through this time in another gutsy yet ugly win. Final Score? 10-7. Trent finds the endzone after plowing Rey Maualuga. You already know what happens next. The man who some how has been believing since 1999, Philly Dawg Dawson knocks in the game winner, but in the 3rd quarter (not so dramatic). Put it on the bored, Cincinnati. You suck.

Unfortunately, tickets to this game were a little out of my college kid price range. I’ll keep my head up and shoot for attending the Indy game later on. But until Sunday, remember that no Bengals fan is, when honest with themselves, actually that interested in the Bengals. In the fan category, we’ve already won. Lets get it done at Paul Brown Stadium on Sunday, boys.