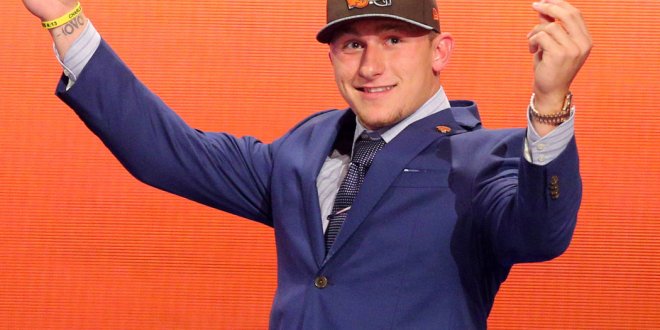 He’s in a McDonalds commercial with LeBron James and Alex Morgan. He’s had Drake write a song for him. He’s been photographed with scantily clad college girls and occasionally enjoys a good sparkler (in his mouth). He’s 21 years old, and he acts like it. He hasn’t done anything that college kids nationwide don’t do every weekend, and has probably done everything most college kids dream of and then some.

And he hasn’t even gotten to his first professional training camp yet.

Forget football for a second, Johnny Manziel is a one-of-a-kind human being. He’s a lightning rod in the media for his celebrity status, which has already netted him a contact list that would make plenty of 10-year NFL vets jealous. People love Johnny Football, but they love to hate him too. It comes with the territory of being the kind of person – not quarterback – that he is, and at a ripe young age, he’s used to it.

Between the lines, Manziel’s play reflects his superstar personality. He may be a diminutive figure physically, but he plays with a heart that’s comparable to all of the great competitors that have come before him. He doesn’t back down, he talks back, and he carries himself with a confident swagger that is always teetering on cockiness. If Johnny Football is on your team, you throw your ridiculous (they’re ridiculous) money signs in the air right along with him. If he’s not on your team, you cross your arms and mutter every time he makes your defense look Pee Wee-ish. You know, like this:

Manziel has more than a little flair in his style of play, but flair can only get a quarterback so far, right? There has to be some substance to this guy somewhere. Sure, he can make crazy plays and give SEC fans aneurysms as their defenses flop all over the field trying to tackle him, but who knows if that can translate in the NFL . He certainly wouldn’t be the first guy for whom an electric college game doesn’t work at the next level.

ESPN’s Merril Hoge is convinced that it can’t work, and he’s not alone. The Cleveland Browns are betting that it can.

A quick aside, the Browns didn’t exactly place the world’s riskiest bet when they traded up to draft Manziel with the 22nd pick. They had already robbed the casino when they took Buffalo’s 2015 first and fourth rounders en route to drafting the 2014 class’ best cornerback in Justin Gilbert. In his first draft at the helm of the Browns, Ray Farmer had already filled a need. Now he was playing with house money, and he used it the way anyone playing with house money should: to win the grand prize.

Think for a second of what that grand prize is if Manziel becomes the NFL star the Browns’ brass were dreaming about when they rejoiced in the war room on draft night. Winning would be enough for the football-crazed and success-starved city of Cleveland, but that won’t be all that comes to the lakeshore if Farmer and company do indeed hit the jackpot. The once-downtrodden Browns will become a goldmine in every sense. Tickets will be impossible to get for less than three figures, Nike will have a field day (bigger than the one they’re already having), ESPN may just explode, and the city of Cleveland will be in a full-fledged and permanent state of euphoria.

Johnny Football is no stranger to the “money” mentality. He understands the brand he’s created – intentionally or otherwise – and how many dollar signs it means to people outside of just him. Even with some considerable weight on his shoulders, it’s doubtful that any amount of pressure can affect him negatively. See this whole discussion so far for proof. But he’s more than flashy plays and fake hype. His talent is quite real.

Manziel is as shifty and mobile as any quarterback that’s already in the NFL, and his ability despite a small frame has already drawn comparisons to (Super Bowl winning quarterback) Russell Wilson. He excels at throwing on the run, but is as accurate a pocket passer as any other quarterback in his class as well. The off-field “issues” Manziel had in college has led doubters to question how good of a leader he can be, but that seems like a moot point when considering every report that has ever come from those who have played with him.

Yes, Johnny Football will need to be smarter when he takes an NFL field for the first time. Defenders in “The League” are faster and bigger than even the SEC’s best defenses, and they’ll likely be motivated by the thought of tearing down all that is “Johnny Football”. The laws of physics and averages say that his body simply can’t hold up for long if he plays with the same “reckless” style that made him famous in College Station, and those two laws are usually right eventually. Still, the Browns will have to let Johnny Football be Johnny Football occasionally, because greatness almost never comes from players who don’t push the limits and take risks every now and again.

A solid core awaits Manziel when he gets to Cleveland, which is perhaps the biggest reason that fans should be excited after all. The offensive line already has two Pro-Bowlers, and it got another promising piece in second-round pick Joel Bitonio. Josh Gordon’s troubles with the NFL’s out-of-touch marijuana policy could pose a temporary problem, but the long term thought of Manziel-to-Gordon is tantalizing. Add another Pro-Bowler in tight end Jordan Cameron and an improved running game featuring Ben Tate, and the potential of Kyle Shanahan’s offense is more than exciting.

An important part to the big picture is the Browns’ defense, which kept them close in almost every game they played last season despite prolonged periods of offensive ineptitude. New head coach Mike Pettine should only help (see the 2013 Buffalo Bills defense), and the aforementioned Gilbert could make an already-good secondary elite. At least in the early going, they could play a major role in taking unnecessary pressure off of Manziel.

As we sit on our computers lapping up every bit of post-draft excitement and football we can find here in May, everything is speculation. Nobody knows if Johnny Manziel will be the savior Cleveland has only seen in its wildest imagination. But for all of the uncertainty, there remain a few absolutes.

There will be frenzy. The Browns will be on SportsCenter so much that it infuriates the rest of the country. Because of this, people will likely compare Manziel to other ESPN favorites like Yasiel Puig. The nation will eventually realize that their comparison is actually backwards because Manziel’s on SportsCenter way more than Puig and he’s way more annoying to them anyway. There will be cool and creative t-shirts. There will be t-shirts that make no sense but are still somehow cool. In time, there may even be thousands of Clevelanders running around downtown with sparklers in their mouths. After all, eating dog biscuits in public is already not weird and socially encouraged.  But above all else?

There will be hope.

For now, though, Johnny “Football” Manziel is just a backup.