Today is officially what some have termed “Deng Day” in Cleveland. The Cavaliers’ newest All-Star will debut for the Wine and Gold tonight in Utah against the Jazz, who are the worst team in the Western conference. It’s reason to be excited, even if it’s cautiously so. Deng won’t make all of the Cavs’ problems go away, but he could be a catalyst that could fix some glaring ones, and there’s no better place to start than on a long road trip with new teammates.

Tonight marks the beginning of a West Coast swing during which the Cavs will play five games in eight days. The Utah Jazz are allowing the fifth most points in the entire Association, which should be a welcoming proposition to a team that just got done scoring 111 in a blowout of the Philadelphia 76ers. If you want to know all kinds of fun facts about tonight’s matchup, the Cavs media notes may interest you.

–  The Cavs open up their longest road trip of the season tonight.

– Since the calendar turned 2014, Tristan Thompson and Anderson Varejao are averaging a combined 25.8 rebounds per game (four contests). On the season, Thompson (9.8) and Varejao (9.7) are pulling down 19.5 rebounds per game this season, which is the 2nd-highest for a rebounding duo in the Eastern Conference (Drummond/Monroe – 21.6).

– Cleveland has the highest scoring bench in the Eastern Conference at 38.5 points per game (4th-best in the NBA). The Cavs have outscored the opponents’ reserves in 27 of 35 contests and have scored at least 40 points 16 times this season.

Tomorrow, we’ll chat about the importance of not only this long roadie, but the next couple of months for the Cavaliers.

Right now, it’s about Deng Day. This whole concept has consumed a lot of my thinking today, so now it’s time to talk about what some have called “the best holiday of 2014 to date”. Everyone’s been raving about it.

Since I’ve been living it for a bit, Deng Day is likely to challenge all others for best non-Christmas/Easter/Thanksgiving holiday in 2014.

Here are some things you should do to celebrate tonight before the Cavs tip off in Salt Lake City at 9 p.m.

– Read this in it’s entirety.

– Watch this and laugh along when Luol laughs. 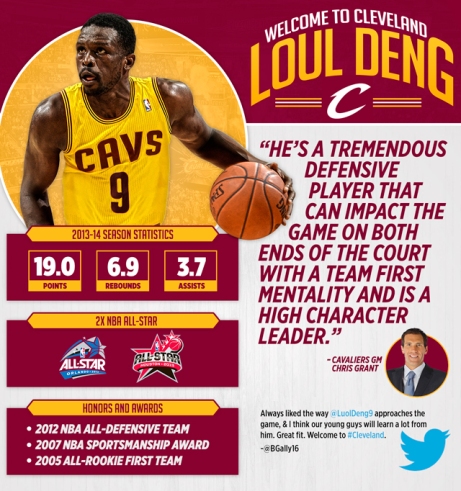 – Buy two of the four options that are listed here.

Deng will serve as an excellent veteran presence for at Cavs team that hasn’t quite ironed out how to play together and utilize their strengths. Now is as good a time as any to make an addition of his caliber, and we’ll see take one of the process tonight.

Happy Deng Day, and don’t do anything Luol wouldn’t do.