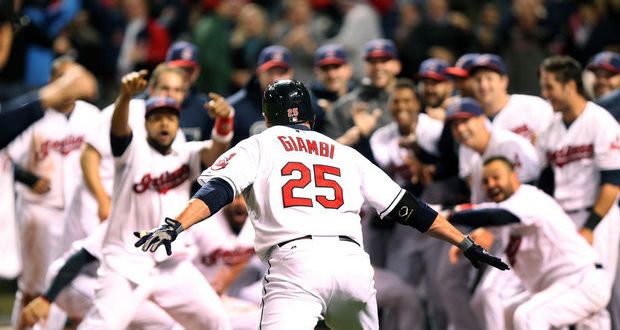 Major League Baseball’s regular season is finally nearing its end. The Cleveland Indians are still hanging on to a one game advantage in the Wild Card race thanks to a six-game winning streak. The Tampa Bay Rays haven’t flinched down the stretch, also riding a six-game streak of victories. The two clubs’ winning ways have earned them the final two spots in the American League postseason race.

The Texas Rangers still sit just a game back of Cleveland, and they will finish with four games against the L.A. Angels of Anaheim. Tonight, the Tribe are in Minneapolis for the first of four against the Twins. Minnesota is 2-8 in their last ten games, while the Angels have heated up and own a 7-3 record over the same period. In other words, the Indians once again have the “easier” route. The reality of the situation, however, is that closing out a playoff berth is never easy.

In case you’ve been out of the country, this happened on Tuesday…

Last night, a lot of other wonderful things happened at Progressive Field, like Nick Swisher teeing off on a two-run homer to the Tribe bullpen in front of 30,000+ people and Michael Brantley being smoother than Keith Stone has ever been. On a separate note, Michael Brantley and Keith Stone should hang out. They’d probably have a lot in common.

That takes us to tonight, when the Indians will embark on their final series of the season. First, your probables for the week/weekend. If the Tribe clinches a Wild Card berth before Sunday, it will be interesting to see if Ubaldo Jimenez gets the start in the regular season finale. Barring any insane finish with three-way ties and such, Terry Francona may want Jimenez on the mound next Wednesday for the Wild Card game on full rest.

While we’re mentioning playoff positioning, here’s the full schedule for the postseason.

It seems that the theme of the Tribe this season is that a different player steps up every night, so let’s not try to speculate too much on who will do what and why. The important part is that this team is playing with a ton of confidence and having fun doing it. That’s a dangerous combination heading down the stretch and into the postseason where it isn’t always the most talented team that hoists the trophy.

We’ve touched on it before, but the veteran leadership in the Indians’ clubhouse will never be able to be understated. Jason Giambi, Swisher and Francona have undoubtedly been the difference for a club that showed tremendous potential last season to do exactly what they’re doing right now. As “Moneyball” famously points out, statistics and “being good on paper” can only carry you so far. The chemistry and overall environment surrounding this year’s team has been entirely different.

Speaking of “being good on paper”, the New York Yankees were officially eliminated from playoff contention last night, and nobody feels too bad for them. On a respectful note, it’s a shame that Mariano Rivera has pitched in his last postseason game. Baseball will miss him, but nobody will miss being dominated by his filthy stuff. A true legend in every positive sense.

The Tribe’s run for October continues tonight, and Zach McAllister will get the ball against Minnesota southpaw Andrew Albers. Albers is the best pitcher the Indians will face the rest of the way, though he did struggle his last time out against the Oakland Athletics.

This blog is done picking scores for the rest of forever. In part, it’s because the novelty has worn off. The more important part is that being wrong every time is not as fun as only being wrong most of the time.

The magic number is four.