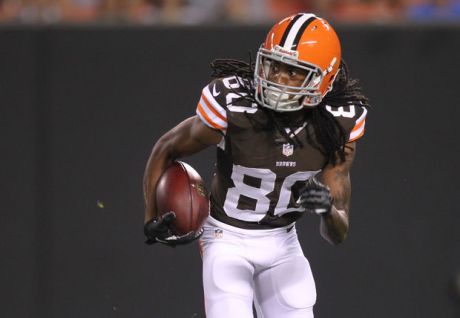 The mood within Cleveland’s city limits last night could not have been more bipolar. On the lakeshore, the city’s most beloved Cleveland Browns may as well have won a Super Bowl (right?), while just blocks away the Indians were finishing the mess that they started on Monday against the Detroit Tigers.

Since the Indians haven’t won in what feels like forever, we’ll give them a night to right the ship and get back on the track to the postseason tonight against the Los Angeles Angels of Anaheim. Now that you’re sufficiently irritated after reading the Angels’ full name and are sick of baseball for the day, it’s time for the football we’ve all been wanting to talk about anyway.

Rob Chudzinski’s Browns made a nice first impression last night, even on the grainy illegal feed that was forced upon the author of this piece because a B Dubs in Louisville flat out lied to his face about carrying the game. The two Blue Moons consumed prior to hearing that news didn’t even come close to erasing the pain. They did erase the ability to drive home, which was shocking and appalling.

At FirstEnergy Stadium, the final score was enough to forget about Buffalo Wild Wings’ buffoonery. Norv Turner’s offense seemed to operate smoother than any Browns offense in recent memory, with Brandon Weeden being the center of attention. His 10-for-13 performance was nice to see, especially because he was without Trent Richardson in the backfield. Speaking of the running back position, Pitt product Dion Lewis looks like he’ll be a nice fit somewhere in the offensive plans.

Like any other preseason game, it was most important to see the first team win their part. While it got a little murky as to when exactly that switch happened, it was clear that the Browns were the better team on the night.

Travis Benjamin is fast, and was responsible for the first “stand up and yell at the TV until the play is over, then celebrate by high-fiving everyone within a 5-10-foot radius of you” moment of 2013. Josh Cribbs congratulated Benjamin on Twitter after the game. Here’s the whole convo.

@JoshCribbs16 thanks fam learn from the best ✊

Barkevious Mingo looks like he’ll be a playmaker in this defense. The athleticism is obviously off the charts, and he got to the quarterback twice. It looked like he had a sack/potential facemask towards the end of the first half that turned out to just be a sack for Quentin Groves and a holding penalty on the Rams, so that went well. Aside from Mingo, it’s apparent that Groves has been in this defense before.

Despite being without T.J. Ward, Leon McFadden and Chris Owens  the secondary performed pretty well. Buster Skrine sticks out as someone who made things happen, and he should be a nice player for Ray Horton’s defense. Skrine seems like the scrappy kind of competitor Horton loves, and it looks like he will finally get to play inside of Haden and someone else (presumably Owens or McFadden), which should maximize his ability.

Thursday night was certainly enough to entice fans to come back for the second preseason game next Thursday when the Browns battle with the Detroit Lions for the rights to this thing in their annual preseason “Great Lakes Classic”. It’s quite possibly the dumbest thing there has ever been a trophy made for in the history of professional sports, but the Browns currently have possession after last season’s 19-17 thriller in Detroit. The Browns have a trophy, so it’s important that they keep it. We all hate Detroit and wish they weren’t allowed to have sports teams right now, so this is a chance to feel better about it.

In total, the Chud era started off on the right foot, and the Dave Chudowsky/Rob Chudzinski interview at halftime was just as awesome as we all dreamed it might be.

Still getting a feel for the whole “FirstEnergy Field” thing, but this winning thing feels pretty nice.

Bring on the Lions.