In the first installment of Believing Since 1999’s Tribe Spring Tune-Up, we’ll take a look at the options available for the Indians this season, as well as what is developing down on the farm at first base. 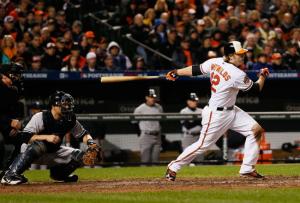 The apparent starter is Mark Reynolds, who led the American League in strikeouts last season, but also hasn’t hit less than 23 homers since 2007. He brings the powerful right-handed bat the Indians lineup has desperately needed, and the Tribe will have to live with the strikeouts. It will be nice to have legitimate power at a power position. Reynolds did still get on base at a .333 clip last season with Baltimore.

With the Indians still searching for a designated hitter, the surplus of corner guys (particularly at first base) makes sense as a DH-by-committee appears to be the route they are prepared to take in 2013.

One of the newcomers that could be a mainstay in that DH rotation is the newly acquired Chris McGuiness. McGuinness was the Arizona Fall League MVP while still in the Rangers organization, and was selected by the Indians in this winter’s Rule 5 Draft after Texas made him available. MLB.com rates him as the 14th best prospect in the organization, but it’s McGuiness’ raw power that gives him a shot at playing significantly in Cleveland this year. He is already on the 40-man roster, and will be an interesting guy to watch as spring training fires up later this month.

Maybe some foreshadowing: Terry Francona mentioned McGuiness as someone they need a closer look at this spring in a recent interview with ESPN Cleveland on the Really Big Show.

The other two first base options for the Tribe that are currently on the 40-man roster are Mike McDade and Yan Gomes. Gomes its the only one of that pair that has Major League experience, debuting with Toronto last season and hitting .204 with 4 homers and 13 RBI in 98 at-bats. McDade spent the majority of the year with Toronto’s class double-A New Hampshire Fisher Cats last season, hitting a solid .281 with 16 homers and 74 RBI in 484 at-bats. His signing shouldn’t come as much of a surprise. The Indians got plenty of looks at him last season, with their class-AA affiliate Akron Aeros playing in the Eastern League with New Hampshire. 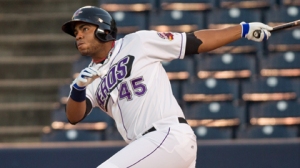 Perhaps the most intriguing organizational depth at first lies with 22 year-old Jesus Aguilar, who spent the majority of 2012 with high-A Carolina. There, he hit .277 with 12 homers and 58 RBI, while also posting an impressive .365 OBP. This earned him a late-season call up to class AA Akron, where his OBP in just 20 games was a hair over .400. Aguilar also joined the Tribe’s top prospect Francisco Lindor in the Futures Game as part of All-Star weekend in Kansas City. Presumably, Aguilar will start 2013 in Akron, so he is somebody to watch for in Cleveland in 2014. He’s ranked as the 12th best prospect in the Indians farm system, and is a non-roster invitee to big league camp this spring.

Another potential option that made the switch to first base last season in Akron is Chun Chen, ranked as the 20th best player in the organization by MLB.com. Chen put up impressive numbers in 2012, hitting .308 with 5 homers and 43 RBI, and getting on base at a .394 pace. With the transition to first still a work in progress and Aguilar moving through the system quickly, Chen’s place in the organization seems to be a bit up in the air.

The other non-roster invitee to Major League Camp this spring is the embattled Matt LaPorta, who’s chances with the Indians are running out quickly. It will certainly be an uphill battle for him to stick for much longer.

Stay tuned for more installments of Tribe Spring Tune-Up, as we make our way around the horn. Second base is next, and where things get very interesting as the Indians have found themselves with a bevy of talented young middle infielders at the lower levels of the organization.

One thought on “Tribe Spring Tune-Up: First Thing’s First, a Look at 1B”