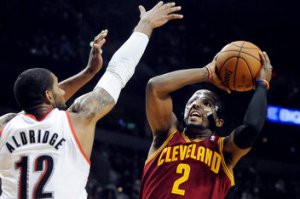 My sincere hope is that if you picked any of the games the Cavs have played out west recently over the last week or so to stay up and watch, you picked last night. Cleveland relinquished a 17-point halftime lead, but finished on an 8-2 run to close out a very good Blazer team in an intense Rip City atmosphere.

The least shocking thing about the victory was the performance that Kyrie Irving turned in on the night. The full highlights of his ridiculousness (way better than anything Rob Dyrdek could ever come up with) are included in NBA.com’s game capsule, but it went something like this…

Dion Waiters is still struggling to put together consecutive games, perhaps another reason that he may be best suited as a sixth man long term. We’ll see what future drafts produce for the shooting guard position.

J.J. Hickson hurt Alonzo Gee’s feelings momentarily after posterizing him, but made it all better by clanking clutch free throws in the fourth quarter.

Tristan Thompson played with an attitude last night and his stat line reflected it, as he collected 19 points and 14 boards, 7 of which were offensive. Thompson is clearly making huge strides in both confidence and comfort in his role. He competed (hate that word, but it fits) all night and it payed off in a big way. The toughness and emphasis on rebounding Byron Scott has preached all season has certainly resonated with Thompson, and he is learning ways to use his strengths to his advantage.

Last night’s game was the reason I’m always inclined to sit down and watch this team. The consistency is obviously lacking, but they will be a competitive team in this league soon. Next up is Utah on Saturday to wrap up the road trip.

Tonight’s post is short and sweet, so let’s get on with it.

– The Browns’ hiring of Norv Turner as offensive coordinator was made official today, along with five other new coaches. This will now turn the attention squarely on what will likely be the biggest change for the Browns heading into training camp this summer, the defense.

– Speaking of defense, Raheem Morris has been reported as a recent interviewee for the defensive coordinator gig. Morris ran the 4-3 as a head coach in Tampa Bay, so the gist of the situation is that nobody knows what the hell the Browns really want to do defensively yet. They’ll figure it out. Still a proponent of keeping the 4-3, even though I probably wont get my wish.

– Mike Lombardi still isn’t part of the Cleveland Browns in any capacity. I double checked just to make sure.

– The Tribe are interested in Ryan Raburn and Ryan Theriot, according to MLB Trade Rumors. My vote is for Ryan Theriot. Defense isn’t his calling card, but he can play multiple positions and his career OBP is .341. He would be a good option to add depth to the infield. Furthermore, my roommate who’s a die hard St. Louis Cardinals fan approves of his plate approach and swing, and I approve of my roommate’s opinions. Stay tuned.

– Believing Since 1999 soundtrack of the day: “The Rascal King”, The Mighty Mighty Bosstones.

That does it for this evening. This post has made Believing Since 1999 history as the shortest thing that has ever been written on the blog. You’re probably relieved you didn’t have to slog through another 1000+ worder (yes, I’m aware “worder” isnt a word, but say the sentence aloud and you’ll see that it flows).

One last note, as an addendum to my post on FirstEnergy Stadium (home of the Cleveland Browns), I wanted to note that Believing Since 1999 Twitter follower and Cleveland City Councilman Joe Cimperman was present at the event downtown. We’re going places here, people. Either hop on the bandwagon or don’t. If you casually read from time to time, I guess that’s OK.