Around this time of year, I tend to get overly excited about baseball season as the Winter Meetings wrap up and players start to find their new teams. I decided to take a little time for everything that has happened so far this winter to set in and marinate, and now I’m ready to talk some baseball and paint a pretty picture for the Tribe in 2013. Here goes nothing.

First, a couple of thoughts on two guys that have been fan favorites for a while. I can’t say that I’m overly upset that Hafner is gone, but I will say that it is a shame that one of the few commitments that this organization has made financially (nobody denied that it was a good idea at the time) just didn’t pan out. The same goes for Grady Sizemore, whose latest episode came in the form of another offseason surgery, reported earlier. It’s too bad for both of these guys that being rewarded with a long-term contract just didn’t work out. Two of my favorite Indians during middle school/high school.

Moving along to some of the additions/moves GM Chris Antonetti has engineered to this point, which is still early in the winter. The first significant addition was Mike Aviles, who was accompanied by Yan Gomes from the Blue Jays way back in November 3rd. The Tribe shipped reliever Esmil Rogers north of the border in return. At the time, it seemed like this was the beginning of what was about to be an all-out firesale. Aviles is a big league caliber shortstop (albeit not a stellar one), but a guy that can start and produce average numbers. He hit .250 last year with 13 dingers and 60 RBI in just over 130 games with Boston.

Conventional Cleveland wisdom would lead us to believe that a deal including Asdrubal Cabrera would have been close on the heels of the Aviles acquisition. Particularly given the Dolan’s propensity for shedding salary (don’t get me started), it seemed like a logical next step. Antonetti insisted in November that Aviles was there to add depth, and to this point (somewhat surprisingly, might I add), he has been true to his word. He said that Cabrera would be the starting shortstop in November. So far, Asdrubal’s still an Indian.

It wouldn’t surprise me if the Indians’ brass pray for Cabrera to have a hot start to boost his stock so they can unload him for a higher bounty of prospects if things aren’t going well at the deadline. Asdrubal would be more attractive to what has proven to be a slow trade market as of late at that time.

Slow trade market you say? Not when Shaponetti are wheelin’ and dealin’ in the one of the few interesting trades of the winter (the other one being all of those Marlins heading to Toronto, holy God). That’s right, Tribe fans. As I’m sure you’re aware if you’re here reading this, Shin Soo Choo and Tony Sipp netted the Indians a high-ceiling prospect in Trevor Bauer, two bullpen arms in Matt Albers and Bryan Shaw, and embattled Reds center fielder Drew Stubbs. I’m breaking with the timeline of events here, but the segue was just too convenient.

Needless to say, Bauer is the key to this whole shebang. Rated as at least a top-25 prospect in all of baseball in whatever rankings you prefer, Bauer is a major talent and also very close to being a contributor in Cleveland. He had some rough outings in Arizona last season, but I’m not going to give that a whole lot of weight. Also, YouTube him to check out his weird warm-ups if you haven’t seen it before. Final note on Bauer for now, his Twitter handle is @baueroutage. Totally legit.

Since Bauer is the apparent “no-brainer” in this deal, let’s take a look at the rest of the guys the Indians netted in this thing. I have a feeling they will be a bigger part of 2013 than some may realize now. First, the two bullpen arms from Arizona. Matt Albers has had an interestingly roller coaster-like career by the numbers, but last season he posted a 2.39 ERA in relief for the D-Backs. He has above-average velocity (upwards of 93 mph), which is a welcome addition to the Cleveland bullpen.

Bryan Shaw is still young (25 years old), and has a career ERA of 3.18, which is better than a few of the season-long ERAs that saw significant time in the Tribe ‘pen in 2012. I couldn’t get a great idea of what Shaw is all about, but we’ll likely see him in Cleveland in 2013 to find out. Interesting little piece to this deal. 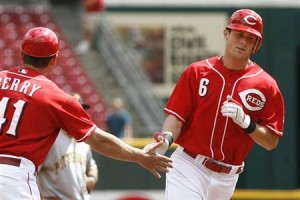 Finally, Drew Stubbs. Before we jump all over him for striking out more than anyone else in the NL last season (get used to it, Mark Reynolds led the AL), let’s take a breath and see Stubbs for what he could be. Think Moneyball here, people. If that doesn’t help, I’m sorry, but I tried. Stubbs is a speedy outfielder that has stolen at least 30 bases in each of the past 3 seasons (something the Indians have been inept at for a while). He has some pop in his bat as well, which has been a focal point of the Indians efforts this offseason. You never know what a change of scenery can do.

Speaking candidly, it sucks that the Indians couldn’t keep Choo. I’m not sure that there’s an Indians fan that ever had anything against him. Still, it’s the nature of the beast for the budget-concious Dolans. As much as I hate it, I give Chris Antonetti and Mark Shapiro credit for making a valiant effort at what’s presumably best for the team long-term.

That brings us to Mark Reynolds. I like what he can bring to the Indians for basically the same reason I just mentioned for Stubbs. Power. Reynolds strikes out a ton and his average is below average, but he does get on base at a respectable .333 clip. Terry Francona isn’t going to ask him to bat .300+, that will be someone else’s job (don’t worry about whose yet).

With all of that said, what’s next? I’ll tackle that on Monday. I’m assuming that tomorrow will be dedicated (rightfully so) to the Browns continuing a winning streak. Just had to talk some baseball.

A friendly reminder, I’ll be tweeting about this week’s Browns game on @BelieveInCLE, this time from home in Medina (woo!). Follow #BS1999 at the bottom of the page and talk Browns/Redskins with me tomorrow afternoon. I haven’t forgotten about the Cavs either, and when Dion is finally back I think we’ll see some marked improvement. Was great to see Kyrie back these last couple of games, and maybe they’ll catch some lightning in a bottle tonight at The Garden.